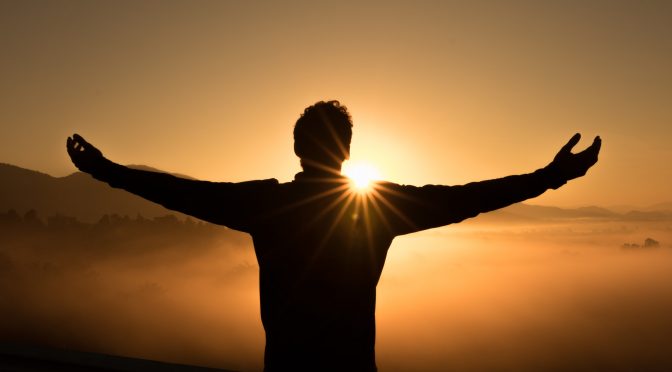 Read with me, “Moses’ arms soon became so tired he could no longer hold them up. So Aaron and Hur found a stone for him to sit on. Then they stood on each side of Moses, holding up his hands. So his hands held steady until sunset. As a result, Joshua overwhelmed the army of Amalek in battle.” Exodus 17:12-13

In Exodus 17 we read the account of the Israelites facing the Amalekites. Moses went up a hill, raised a staff in his hands. During the moments his hands were in the air, the Israelites prevailed against Amalek. Only, Moses’ arms would grow tired resulting in his hands lowering to his sides, again. The result was that Amalek would have the advantage as long as his hands were lowered. Aaron and Hur lowered Moses on a stone to sit, and stood one on each side of Moses, raised his hands in the air. As long as Moses’ hands were raised the Israelites had the advantage. God gave Joshua the victory over Amalek that day as a result of Moses’ raised hands.

What stood out to me in this passage of Scripture is the consequence that came from Moses, Aaron and Hur’s actions. Joshua won, because Moses was lifting his hands. As he raised his hands in the air, he was ascertaining victory for him, his people and their families. As Aaron and Hur lifted Moses’ hands, their own hands were raised, also. This entire passage reminds me that when we raise one, we raise many. It was necessary for Aaron and Hur to lift their own hands, in order to raise Moses’ hands.

Worship works similarly. When we are fighting, when the enemy comes against us, our answer is in worshipping Him. As we lift our hands in worship, we see the enemy fall. When our hearts are raised to Him in worship, we see others overcome the enemy. In raising our hands, we raise His people. Raising our hands inadvertently raises a standard against the enemy. It would not have been possible for Aaron and Hur to lift Moses’ hands without also raising their own hands underneath his.  As you consider this, think today of people you know in need of a breakthrough, in desperate need of victory, raise your hands in worship on their behalf today just as Aaron and Hur did for Moses. Stand in the gap and praise until they see a breakthrough.

Worship Him today, as a physical expression of your faith in His sovereignty, as a tangible way of displaying our faith in His ability to see you through the enemy’s onslaught. Know that He is mighty and able. Know the God that you worship gives you the strength to stand, heart and head raised. Position yourself to worship with reverence before Him.